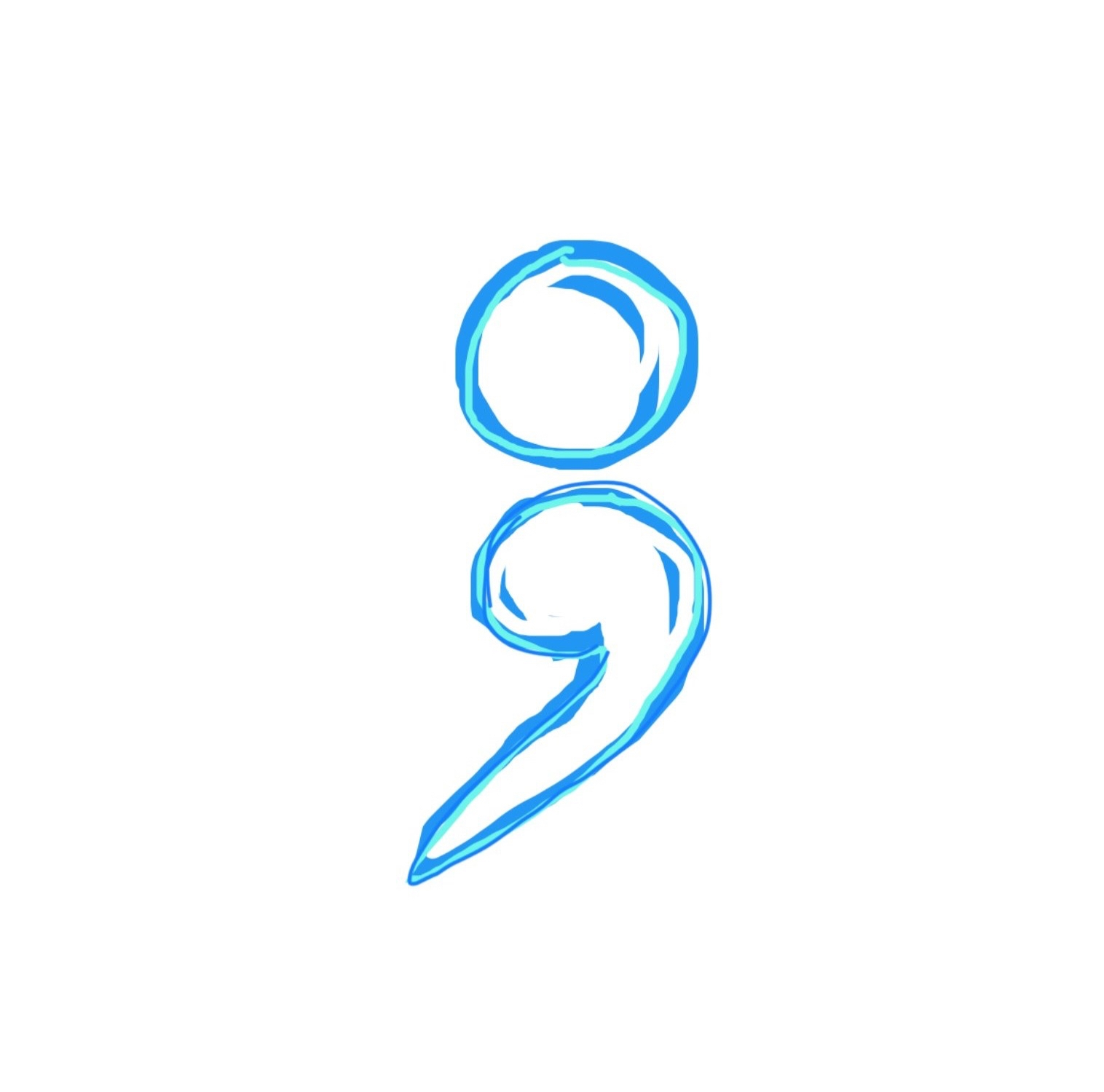 I did something out of character about a year ago, I got my very first tattoo. I’ve always admired others tattoos and thought about getting one for a really long time. I wanted it to be something meaningful, a reminder and a promise to myself. Something that would anchor me to this life. So for years I kept putting it off, I didn’t want something on my body that I would later regret. One day I came across this article about the newest tattoo trend, a semicolon. I was intrigued, why would someone get that as a tattoo? Will the # sign be the next tattoo trend? Then I read the article and realized it wasn’t another silly trend, it was for a cause. A cause that was my everyday struggle and my worst enemy, depression. I got my semicolon tattoo a week later.

Project Semicolon is an organization working to prevent suicides and raise mental awareness. “A semicolon is used when an author could’ve chosen to end a sentence, but chooses not to.” ( Project Semicolon) The organization founder Amy Bluel wanted to make a difference in the world and tell people her own struggles with depression/suicidal thoughts. A platform to make peopl realize that depression is an illness, just invisible to everyone else but the one dealing with it. That just because you’re not able to see and feel it doesn’t mean it’s okay to mock and ridicule people dealing with mental illness.

For the longest time I held it all inside, I was shameful of my ugly past and the dark emotional present.  I was raised in an “emotions are for the weak” and “ somethings are best buried” culture. I was paralyzed on the inside from shame and guilt but no one could tell that I was sinking based on how I portrayed myself. My first suicial thought was at the age of 10, I didn’t understand why dying seemed like an easier option than living. I didn’t understand why I would silently cry myself to sleep every night or why I was plagued by thoughts of “ maybe I’m better off dead”. I struggled to understand why it felt like each of my negative emotions felt amplified and my positive emotions dulled. I went on this way for 10 years, that’s about half of my life. In high school I had a 3.7 GPA, ranked in the top 10%, won public speaking competition, and played sports. I didn’t act out or show signs of being mentally unstable. I was by all appearances “ a model student”.  I knew what people saw, the fake “happy” persona I put on. It wasn’t because I wanted to pretend I was happy, it was because no one wants to be around an unhappy person or be responsible for looking after them. I wasn’t ready to talk, about my abuse or my depression. I just wanted to be normal.

Then something changed two years ago, I started by forgiving myself and my abuser. I had to forgive in order to move past my guilt and anger. Slowly life started getting a little bit brighter and a little easier. The hatred that lingered in the background slowly consuming little by little of my soul was extinguished. I didn’t want be shackled by my past anymore, I wanted to feel what happy felt like. Presently I’m content, but I’m slowly working toward happiness. I still have a long way, some days are better than other and I know I will never be completely free. I do fear that darkness a little but I’ve grown to face it head on instead of ignoring it. This is the main reason I started this blog, to express myself through writing and to let others know that they aren’t alone. There’s nothing wrong with being a little broken, I think it makes you empathize more with others. If you’re struggling with a mental illness just know that you matter, and it’s going to be okay! If you know someone who is dealing with a mental illness, be kind and try to understand their struggle. Don’t ignore people when they ask for help, it’s much harder to ask for help than to struggle by yourself.